PROFESSIONAL TRAINING AND MANAGEMENT FOR PERFORMERS WITH DISABILITIES 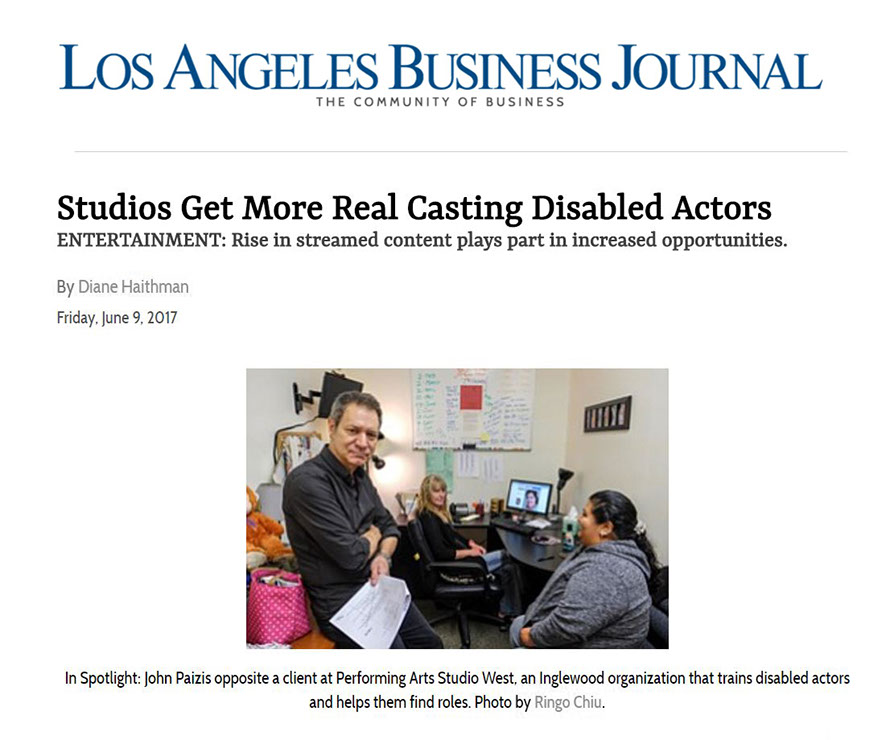 Michael Patrick King turned to an Inglewood company for help needed to cast actors with Down syndrome for his new Amazon.com pilot.

The co-creator and executive producer of CBS’ “Two Broke Girls” and writer-producer of HBO’s “Sex and the City” features seven actors with Down syndrome in his latest show, “Love You More.”

Two of those actors, John Tucker and Luke Zimmerman, studied at Performing Arts Studio West in Inglewood, where the company has offered training and professional representation for performers with developmental disabilities for 19 years.

Performing Arts Studio West received state support last year for its training program. The organization also represents its clients as a manager and often has a representative on set during production, said founder and President John Paizis.

Tucker and Zimmerman received, for their work on the “Love You More” pilot, the highest [weekly] salaries thus far received by the studio’s clients.

King said the motivation for casting actors with Down syndrome had nothing to do with money, but rather a commitment to realistic casting. He and others involved in hiring actors with disabilities said demand for such actors is increasing, fueling businesses that provide the training required to meet Hollywood’s standards.

King attributed the heightened demand to an increasingly competitive TV landscape. Producers have been challenged to explore new worlds as streaming platforms such as Amazon and Hulu of Santa Monica try to offer content outside the mainstream.

“Something that hasn’t yet been seen is the best business model at this point in television,” he said. “There is so much television that people are looking at an entirely new range of characters, something that’s completely nowhere else.”

King added that “Love You More” is part of an observable wave of growing acceptance of actors with disabilities on TV. The pilot was produced by his Burbank-based MPK Productions Inc. in association with Warner Bros. Television.

ABC’s “Speechless,” a comedy about an eccentric family, features a teenager with cerebral palsy, portrayed by Micah Fowler, who has the condition in real life.

The series ranked No. 6 of 40 network sitcoms last year, according to Nielsen ratings. That amounted to about 7.2 million viewers an episode, good enough for the network to renew the show for a second season in May.

King said that actors with Down syndrome did not cause any additional production costs. Producers had to adjust to a bit more spontaneity and improvisational work than usual, but those generally don’t cause delays.

Paizis of Performing Arts Studio West said “Speechless,” as well as A&E’s Emmy-winning reality series about adults with Down syndrome, are also helping to create changes in the way people with disabilities are perceived by studio executives.

“They are showing the industry that shows with people with disabilities can be moneymakers,” he said.

The number of TV characters with disabilities increased to 15 in 2016 from eight the year before, according to data from media-tracking organization GLAAD. Last year’s figure amounted to 1.7 percent of all on-screen characters, the highest tally since the company began gathering statistics on disabled TV characters in 2010.

A 2014 study released by the Ruder Family Foundation of East Hampton, N.Y., meanwhile, noted 95 percent of those characters are portrayed by actors without disabilities.

Adam Moore, national director of equal opportunity employment and diversity for SAG-Aftra, said he does not think the TV and film industries have yet reached a tipping point, but he anticipates a continued increase in the casting of disabled actors.

“The conversation is at its highest pitch in quite a while,” Moore said.

King tapped Gail Williamson, an agent at Studio City’s Kazarian Measures Ruskin & Associates Inc., who handles clients with disabilities for the agency, to help him cast “Love You More.” She referred him to Performing Arts Studio West, where he found Tucker and Zimmerman.

Williamson started in the business to aid her son Blair Williamson, who has Down syndrome, in pursuing an acting career. She said social media has opened up circles of communication for families dealing with disability, and that increased awareness has created a bigger demand for representation on screen.

“Social media has given us a virtual dining table,” she said.

Actor Isaac Leyva, who has Down’s syndrome, stars as Marco in Any Day Now, his feature film debut, which arrives in UK cinemas this month following an award-winning turn on the international festival circuit. (click here to read more and view trailer)

Inglewood theater group showcases actors with disabilities for Hollywood (May 3, 2013)

Actors with developmental disabilities compete with non-disabled performers to get roles in Hollywood. But disabled actors often are typecast as handicapped characters. Performers enrolled in a theater group in Inglewood want to break out of that box.

About 90 actors at Performing Arts Studio West are rehearsing more than a dozen pop and classic rock songs for their upcoming show called “Recovered: A Musical Journey.” (click here to read more and view trailer)

Performing Arts Studio West’s “Recovered” features actors who have appeared on “Secret Life of the American Teenager” and “Legit.”

Rio Wyles is a rapper with autism who performs with the Performing Arts Studio West.

The group is doing an original musical featuring classic rock songs reinterpreted and performed by people with development disabilities. The PASW studio is in Inglewood. (click here to read more and view trailer)

How FX’s ‘Legit’ became the darling of the disabled community

The comedy’s creators worried its disabled characters might offend viewers, but found those portrayals have earned the show some of its fiercest fans. (click here to read more and view trailer)

drag singer and his closeted district-attorney b.f. in “Any Day Now,” the

sensitive sophomore outing of helmer Travis Fine (“The Space Between”). This

intimate character drama explores gay adoption rights, or rather the lack thereof, in 1970s Los Angeles without ever becoming preachy or pushing for contempo relevance. (click here to read more and view trailer)

Inspired by a moving true story, Travis Fine’s “Any Day Now” may be set in the ‘70’s, but the story’s elements feel like a story ripped from today’s headlines. (click here to read more and view trailer)

The Heidi Chronicles, Chapter 49: Video of Heidi as the “Mean Dog”

A unique actor’s studio for people with developmental disabilities is growing into one of Inglewood’s most respected schools. May of the students at the Performing Arts Studio West are finding success in high profile television shows, films and commercials. (click here to read full article)

“The Secret Life of the American Teenager” show prospectus

From Brenda Hampton, creator of “7th Heaven,” comes a bold new drama series that takes a unique look inside “The Secret Life of the American Teenager.” (click here to read full article)

One woman’s mission to include performers with disabilities in film and television (Jun. 3, 2008)

The moment you start talking with film, television and theatre actress Diana Elizabeth

Jordan, her positive spirit is infectious. She makes you a believer that good things are

happening all the time. (click here to read full article)

Nick Daley, who has Prader-Willi Syndrome, guest starred on “Saving Grace.” Blair Williamson, who has Down syndrome, got a nose job on “Nip/Tuck.” They're among those with developmental disabilities who want to be stars — and are getting a shot at acting. (click here to read full article)

“Thank you for your commitment to hiring talented performers with disabilities”. (click here to read full article)

Talented performers with developmental disabilities will perform in a very special musical at a theater in Torrance Friday, May 3.

Sharon Schoenberg interviews PASW founder John Paizis, as well as a few of his acting students for SoCal News.

Inglewood theater group showcases actors with disabilities for Hollywood (May 3, 2013)

Actors with developmental disabilities compete with non-disabled performers to get roles in Hollywood. But disabled actors often are typecast as handicapped characters. Performers enrolled in a theater group in Inglewood want to break out of that box. (click here to listen to interview)